On 27th March 2018, the Robogals Monash chapter held their annual Industry Gala night,  a way to thank volunteers for their hard work and dedication throughout the year by providing them with an opportunity to connect with Robogals’ sponsors and network with representatives from various STEM sectors. 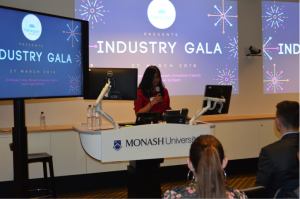 The night was also a chance for our volunteers to listen to three women in STEM share their experience building their careers, promoting gender diversity within their companies and the positive impact they have witnessed organisations like Robogals have on the wider STEM community.

Our first guest speaker was Lina Chan, Developer at ANZ, who shared how she discovered what she was truly passionate about by deviating from the traditional pathways of achieving success set out for her, and instead forged her own path. Her experience has taught her the importance of being open-minded to new opportunities, in order to better connect with yourself and your purpose in life, and learn a different perspective.

Our volunteers then heard from Professor Jean Armstrong of Monash University’s Faculty of Engineering, who described the life of a female STEM academic. She revealed an honest and awe-inspiring depiction of her struggles and triumphs as a female within this field, where she specialises in Digital Telecommunications. Professor Armstrong shared her opinions on the three best and worst aspects about being an academic, and shared her top career tips for students considering an academic career. In particular, she emphasised the importance of learning how to prioritise, learning how to say no, and the advantages of establishing a mentor early on while career-building.

Our last guest speaker of the evening was Emma Love, Implementation Manager at Ericsson, who treasures a personal connection with Robogals, having been the Co-President of Robogals Perth during 2014 to 2015. Emma discussed the benefits of putting yourself out there and giving new challenges a try, especially if it pushes you to discover unfamiliar territory. She revealed that the best moments of her career so far always occurred when she actively pushed her boundaries and discovered something new about herself. Following the presentations, our volunteers had the opportunity to network with representatives from a range of organisations including Advisian, ANZ, Bosch, Deloitte, Ericsson, Jacobs and Real Time Leaning (RTL), as well as several members of the Engineering Faculty of Monash University.

We were also honoured to have Robogals CEO Ami Pasricha, as well as several members of the Robogals Global Committee and the Board attend the Industry Gala night.

The Robogals Monash chapter would like to thank both the Monash Executive Committee, as well as the newly formed Monash Support Team members, for their hard work and dedication, working together to plan and deliver such a successful event.