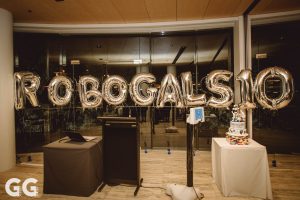 Robogals hosted their 10th Anniversary Gala on July 14, bringing together current volunteers and alumni to celebrate Robogals’ achievements over the past decade and reflect  on the nights’ theme – Diversity, Development and Disruption.The event was generously hosted by the Melbourne and Monash chapters here in Melbourne where Robogals was founded in 2008.

Robogals’ newly appointed Board Chair, Dayle Stevens (http://daylestevens.com) , led the night of guest speakers during entrees. Dayle recounted how she was first involved in Robogals. As Divisional CIO at AGL Energy, and a widely respected technology leader in disruption, Dayle revealed how spending time with Robogals volunteers continues to inspire her and help her reignite the spark to keep challenging the boundaries of her work. 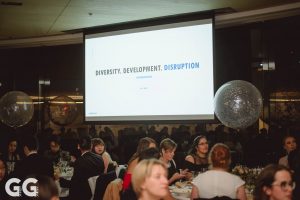 The first guest speaker of the night was Professor Karin Verspoor, Head of Computing Systems at the Melbourne School of Engineering. Karin has considered herself a woman in technology ever since she built her very first computer program at just nine years old!

Karin identified ingrained sociocultural norms, a leaky education system, and strong stereotypes perpetrated by the media landscape as the three dominant issues in the battle to bring awareness to females in the STEM fields. Organisations like Robogals play a crucial part to disrupt this status quo by acting as a pipeline to get young girls into the field.

The second guest speaker was Professor Elizabeth Croft, Dean of Engineering at Monash University, who took audience members journey through her life and career in STEM. She  highlighted the men and women who have empowered and supported her along the way to reflect on the importance of including both men and women in conversations surrounding STEM gender equality to achieve real and long-lasting change. 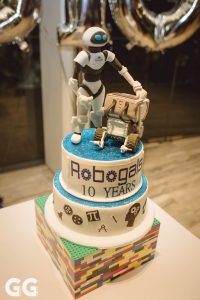 In their closing speech for the night, Robogals founder Marita Cheng joined co-founder Mark Parncutt remotely via Teleport, a telepresence robot for remote communication built by Marita’s start-up, Aubot (https://aubot.com/index.html ). Mark and Marita recounted meeting in their second year of university while running a robot design competition which sparked the idea for an organisation that would engage and inspire girls to a career in STEM…Robogals!

May the next ten years be just as successful as the first ten have been at Robogals!