This blog is part of our #PeopleOfRobogals series. This series highlights our volunteers from across the organisation, from our chapters to our leadership team and board members.

Robogals is made possible by our amazing volunteers from across the globe, ranging from students to professionals of all genders, ages and backgrounds. We come from a wide range expertise from engineering to law to commerce and are all united under the cause of gender equity in engineering and technology.

We sat down with former CEO of Robogals, Nicole Brown, to learn about her experiences and fondest memories of volunteering at Robogals over the past 7 years!

What inspired you to pursue a career path in the STEM fields?

I’ve always loved problem solving but I didn’t have many female role models growing up, so even though my dad and my grandfather were both engineers, it never occurred to me that engineering was an option until about two weeks before VCE subject selection was due and my parents had me do a careers aptitude test.

The funny thing is, there were always hints towards engineering; I was always interested in how things worked and constantly questioning how and why things happened. I had a great upbringing, but I just never had that person that sparked the idea that engineering was a possibility.

What do you think is the biggest challenge women face leading into a STEM career? How is Robogals changing the game for them?

The problem is a lack of adequate role models to demonstrate what engineering is about. I think the biggest responsibility we have is challenging society’s expectation of what kinds of careers people can pursue.

Robogals is changing the game by taking that first step to raise awareness and engage young girls, and also producing positive role models for future generations. Robogals has a strong university-level culture that invites everyone to contribute, which I believe has fostered a sense of positivity and self-belief amongst our volunteers and created a solid community.

The government is becoming more committed to bringing women into STEM. What do you think is encouraging this new awareness?

People are becoming more confident in the power of their voices. Society has proven it’s ready for change through the marriage equality vote and the campaigns for equal pay; so the power really lies with the public now. As companies recognise and respond to this demand, it has a domino effect where one success will encourage another, and the government has clearly noticed this pattern in the private sector. 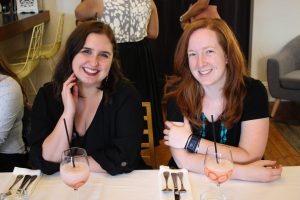 You have been here through Marita’s leadership, your own leadership and now Ami’s. How do you think Robogals has evolved through these leadership changes?

Well each CEO has gotten taller so the next CEO will have to be at least 7 foot!

When Marita started, Robogals evolved as quickly as the conversation going on in society, and Marita was fantastic with her entrepreneurial mindset. She was all about getting the publicity, growth, sponsors – very much the founder’s drive to success.

When I took over, my focus was on our stability. I hope I was able to create the foundations that we needed to make Robogals a sustainable group, as well as develop the processes to help us move forward.

Ami is now focused on taking these foundations and growing the organisation. Her legacy will be developing strong, long-term strategies, setting key partnerships in place and taking Robogals to new heights.

What have been some of your proudest achievements as CEO?

I think our biggest achievement as an organisation, was our expansion into new countries. During my time as CEO, we expanded into New Zealand, Philippines, South Africa, Saudi Arabia and Canada! It’s been amazing to witness the impact that Robogals has been making outside of HQ in Melbourne.

On a personal level, I was recognised as a runner up in the Queens Young Leader in 2015 for my work with Robogals. However, most of all, my proudest achievement was witnessing the incredible people I worked with grow throughout their time in Robogals and the successes they have had since are absolutely incredible. Some have founded businesses, some are working with incredible companies such as SpaceX and Google and others have continued to volunteer in different groups making a difference.

At what point did you decide to step away from Robogals?

There is a need for organisations like Robogals that are constantly evolving to bring in new ideas and new leadership. I realised in 2016 that we needed a new leader, someone who could take the organisation to the next level and it’s a credit to Ami that her ideas were much bigger and bolder than I could have imagined. I felt it was proof that I had given my all during my time as CEO.

What are some of your very favourite memories from your time with Robogals?

I still remember the first time I led a workshop, we took a Grade 3 class on a rural trip to Ballarat. It was a two hour workshop but about an hour in, the students had finished everything we had planned. They were just so advanced, and the girls were so enthusiastic, asking to do everything.

I also remember, I was just new to the CEO role when I received an email from someone in Birmingham, England, saying that they had attended one of our workshop and loved it so much, she asked if they could start a Robogals chapter in the UK!

What do you wish people knew about Robogals?

The biggest thing that is underpublicised is the outreach we have. So many people I have met from industry know about Robogals, that I think more companies would recognise that Robogals is a valuable cause to invest in, and identify it’s an excellent pathway to potential employment for our university volunteers!  Also, the community feeling at the university level is not widely known. I frequently go to events for women in industry and so many people that I speak to know about Robogals somehow or another!

It would be fantastic if both companies and university students could see the outreach we have. I think Robogals is a very valuable cause for companies to invest their support in, and it’s an excellent pathway to potential employment and a community to become a part of for our volunteers!