This blog is part of our #PeopleOfRobogals series. This series highlights our volunteers from across the organisation, from our chapters to our leadership team and board members.

Robogals is made possible by our amazing volunteers from across the globe, ranging from students to professionals of all genders, ages and backgrounds. We come from a wide range expertise from engineering to law to commerce and are all united under the cause of gender equity in engineering and technology.

We sat down with the president of the Robogals Melbourne chapter, Melissa Um, to learn about her time at Robogals as well as her experiences working, studying and volunteering in the STEM fields. 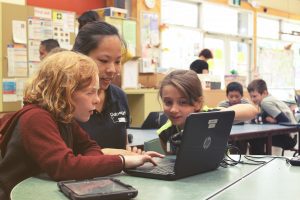 How did you become involved in Robogals?

I discovered Robogals during the summer break right before my first year of university.

I’d always done extra-curriculars throughout high school so I wanted to find something engineering related at Melbourne.  I did a bit of training throughout the year but it wasn’t until I went to one of our workshop at a primary school in November that year that I discovered how much fun the work is.

What has been your greatest challenge as President?

Overall, it’s been easier than I thought it would be. I think we’ve been really lucky, we’ve had a great team where everyone is really involved and passionate about our mission. Definitely the biggest challenge so far was the transition from my first year to my second year as president. In my first year the majority of the team, including me, were new to our roles so we bonded over that shared experience. But then a lot of people left and new people joined, so we had to start from scratch to rebuild the team and it was a huge learning experience for me.

What is the biggest change you have witnessed happen at Robogals?

We used to focus on reaching as many kids as possible but recently we’ve started focusing on the impact that we can have on each individual instead. I think it’s a good change because teaching a greater number of girls doesn’t necessarily mean that we’re achieving the maximum impact that we could have, compared to teaching the same group of girls more often and supporting their interest in STEM. I’ve seen this trend occurring in other chapters too, so I think the next step for us, is to continue developing more advanced workshops that can support girls long-term, and see where the shift takes Robogals.

Melissa’s experiences working, studying and volunteering in the STEM fields.

What are you studying in the engineering field?

When I graduated high school I wasn’t sure what I wanted to do so I picked Melbourne University because they use the Melbourne model where you do a very broad undergraduate and don’t specialise until your Masters. I did a Bachelor of Science as my undergraduate,which had a wide variety of STEM subjects including introductory engineering. I’ve been working or volunteering part-time throughout most of my degree, so I’ve actually just started my Masters of Engineering majoring in Civil this year. For example, last year I was volunteering at my local council and only studied part-time.

How did you become involved with your local Council?

Actually the manager that I ended up working with at the Council, I had met previously through Robogals when he reached out to us to demonstrate a local coding club he had set up. Later on when I was thinking of ways to gain more working experience, I reached out to him to ask if he knew anyone and he actually invited me to join his team.

What did you do whilst working at your local Council?

I was there for eight months and worked on two different teams. My first rotation was on the waste and recycling team where I did stormwater management and education at primary schools in the area.

My second rotation was on the strategic transport and traffic engineering team, we evaluated road designs petitioned to the Council and engaged in strategic planning with urban planners.

My favourite project was when we worked with local schools to involve their communities in active travel and reduce reliance on cars, reducing traffic congestion.

You said you’ve been working part-time, where do you work currently?

I’m currently working for Lendlease on the Melbourne Metro Tunnel project as part of their cadet program. I found the program advertised on my university’s careers page and applied at the of last year.

When did you start volunteering?

I started when I was about 15, it was an optional extra-curriculum I did through my school and I found I really enjoyed it, so it stuck. Over the years I’ve done a few different things but mostly I’ve been volunteering at Robogals and St John Ambulance.

How did you become involved with St John Ambulance?

I started off as a youth member and gained experience teaching kids, and eventually I was put in charge of one of their youth programs in my area. I’ve been with St John for almost seven years now, so I’ve done all their courses in CPR and first aid several times and I still really love it.

Most people do their first aid training once and then never use it, but volunteering at St John means you go out to events like music concerts or community events and you actually get to use those skills you’ve learnt.