In 2019, while still at university, Eliza and a group of her biomedicine peers travelled to the Philippines to run preventative health education lessons in the local schools.

Seeing the communities’ need for further health education, and inspired by the success of the volunteer mission trip, Eliza developed a program to help close the gap in health inequality – and so Halad to Health was born.

Like for many, 2020 didn’t exactly go as planned for Eliza and the lockdown swiftly brought to a halt Halad’s future missions.

This was a turning point for the charity – would they leave their work as it was or shift gears in a new direction?

Eliza and her team decided to pivot their attention to raising funds for Halad. They saw a gap in the market for affordable and student run pre-med tuition services.

Despite all that has happened, Eliza describes it as a ‘blessing in disguise’.

“It’s sort of hard to admit when something is tragic but actually goes in your favour – for the start-up of Halad, however, it really was.” 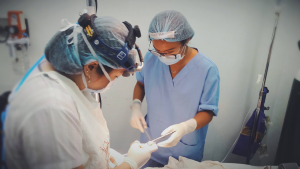 2 Eliza on a volunteer trip with AIESEC in the Philippines

Before all this, Eliza was a biomedicine/commerce student at Monash University, passionate about making a difference in the world. She first travelled to the Philippines at the beginning of 2017 with AIESEC, volunteering her time to train and work as a scrub nurse with local doctors and nurses. The trip planted a seed of an idea in Eliza’s mind.

“Thank you will never be enough for all the doctors and nurses who really invested their time into me,” she said, “I knew I wanted to pay that investment forward and help educate others.”

But how does a third-year university student start a not-for-profit in a foreign country?

Fast forward two years, Eliza received a phone call from a local friend, who lived in Mindanao, the southern island in the Philippines, and would later become her Halad to Health co-founder. After that call for help, she returned on a ‘discovery’ mission, visiting the local hospitals and schools with new local friends, asking questions and observing the health system as it was.

They started small. They noticed the posters on the walls of the local hospitals were all written in scientific English which presented a clear barrier to health education as many locals were from farming communities with little knowledge of English. So they translated the information, breaking it down into three basic dot points to make it easier to understand.

She then recruited Monash student volunteers who travelled to the local Filipino schools, presenting and contextualising the health information to the students.

And so Halad was born with the message that  “a real change can happen when you provide someone with the right health education to begin with”.

She reflects “we get taught about the burden of global health at university but not how possible it is for us as students to fill that void.” 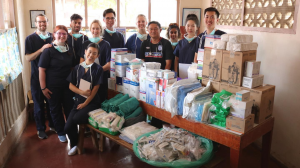 Even before the pandemic started, Eliza was conscious that Halad was not sustainably funded.

Often digging into her own pockets, Halad needed a more constant source of funding to allow for future missions.

And so the team brainstormed. They trialled offering a masterclass for pre-med students, run by past successful candidates, preparing them for the notoriously difficult Graduate Medical School Admission Test (GAMSAT). It was an instant hit with students who were used to paying upwards of hundreds of dollars for resources. Soon, a six-week course was created, one that quickly moved online and became popular with not just Monash students, but students from all around Australia and the UK.

As their GAMSAT services continued to grow, Eliza and her team set a new precedent for affordable, socially conscious and student run tuition. The tuition fees go towards Halad’s mission and Eliza believes that being a socially conscious option for students is one of the reasons their tuition services have proved so instantly popular, reaching over 1600+ students (across paid and free GAMSAT services) and raising 6-figures in this first year since launching. 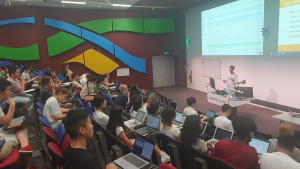 There is a common misconception about company founders that the success story we all see was the first idea. Halad to Health, both in their missions and the GAMSAT services, seems like it’s been years in the making, and Eliza admits that it has.

“The successful company is never the first idea! Ever since leaving high school I have created start-ups and, let’s be honest, they’ve all failed.”

Failure, however, is what led to Halad and its success.

“It stands on the shoulders of all the failures that came before it,” she said.

For those looking to start their own business, Eliza recommends having the mentality of just listening.

“You’re not there to impose a solution, you’re really just trying to hear what the problem is.”

Eliza also adds that doing what you truly love and are passionate about sometimes requires patience.

“I had to be honest with myself and realise that I had to determine my own way of doing things. I had to have faith in myself that I would see when the time was right, but I also don’t think I would have the skills to pull it off if I hadn’t taken the time to learn and grow my networks.

You’re expected to have it all figured out when you reach the end of your degree but, to be honest, I really did not.”