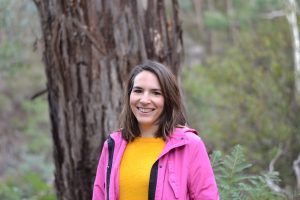 A message lost in communication led forestry student Elsepth De Fanti to remote Tasmania, where she hiked through incredibly dense bush and worked on field sites for 10 weeks.

At the time, she didn’t realise that she was almost overlooked for the forestry placement, which was “90% outdoors and physically demanding”, as the employer had requested the position be filled by a male student.

This request was never received by the interview panel and so Elspeth, and another female student, were successful applicants for the work.

“I think they felt that their teams were very blokey and that it was really hard work,” the now 34 year-old said.

However, Elspeth believes that she and her colleague proved that the request should not have been made.

“Quite clearly we could fulfill the role and excel in it! I felt it was a real triumph in terms of showing them they had made a real mistake in making that request.” 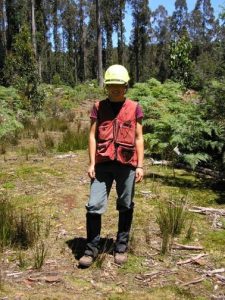 Now 10 years into her career, Elspeth has tested the boundaries of the traditionally male-dominated field of forestry.

“Operational forestry is still very much a blokes world and it was definitely in my face when I entered the work environment,” she said.

Elspeth firmly believes that the future of forestry is changing, and as a science pathway that remains largely undiscovered, it holds enormous potential.

“Forestry is broad and all encompassing and it can’t be easily defined. It’s largely the science and practice of planting, managing, and caring for forests, it’s just so diverse.”

After completing a Bachelor of Forestry/Bachelor of Science from the University of Melbourne in 2007 (similar to the current Forest Ecosystem Specialisation in the Ecosystem Science Major in the Bachelor of Science), Elspeth was given an opportunity to work with the Victorian state government to manage invasive species across Victoria. She recalls that State Prohibited Weed, known as Mexican feather grass, was mistakenly sold from a large hardware chain across Melbourne as part of a Mother’s Day promotion.

“It was treated as a huge biosecurity threat so we had to put together a whole operation to retrieve every plant that was sold from people’s gardens. Luckily we did have success in retrieving a majority of them by communicating with the public. It was a very exciting job!”

Following on from this, Elspeth was invited by the Portugese government to travel to the Azores and present on Australia’s approach to biosecurity threats. 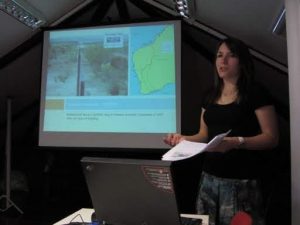 Elspeth giving a presentation on Mexican Feather Grass in the Azores, Portugal

Elspeth went on to run a BushTender program, funding farmers to rehabilitate parts of their property and to protect native vegetation on their land. She has also helped plan for Melbourne’s growth areas, such as Weribee, Officer and Cranbourne. In this work, she worked to protect key conservation areas and key species such as Eastern Barred Bandicoots and Growling Grass Frogs.

She says that a career highlight was travelling with an Australian team of firefighters to help Canada with their wildfire management.

“I think that it is a really exciting time to enter into Forestry because there is a lot of international work out there! I have a friend who is being sought after from Peru to Papua New Guinea to everywhere, just because the skills they have are so few and far between.”

Elspeth has also enjoyed the potential for her career to cross over into a communications capacity. While working on the Glenelg Ark Fox Project in Dartmoor, Elspeth developed strategies and dabbled in the area of marketing.

“I was pleased that while I was working in a science environment field, I could still apply my creativity which I loved!” she said. 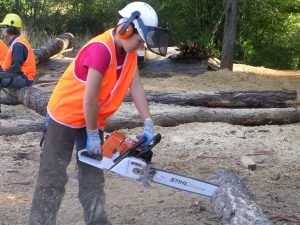 For those interested in similar pathways, Elspeth recommends gaining skills in Geographic Information Systems (GIS) and remote sensing, something she says is a “big opportunity area for the future.” GIS uses the science of geographical intelligence to analyse multiple, complex datasets layered over defined territories, revealing hidden patterns and trends.

Overall, Elspeth believes it is a great time to be entering this field of science.

Current opportunities and relevant links for women considering a career in Forestry:

Previous StoryRobogals takes off in Nairobi
Next Story#PeopleOfRobogals: Alexa Nguyen – Cracking the Code