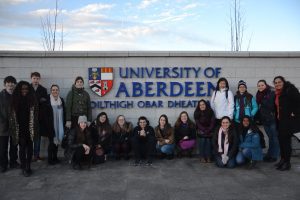 INE conference at the University of Aberdeen. When we asked the regional team what stood out at EMEA SINE, they all agreed it was the palpable sense of community, interest shown by volunteers, level of engagement and the desire to share ideas.

SINE (Seminar Inductive New Executives) is a conference hosted annually by each of Robogals’ three regions: Asia Pacific, North America and Europe Middle East and Africa (EMEA). SINE is an exciting time for Robogals as volunteers from across a region come together to learn more about the broader Robogals community through workshops, presentations and panel events.

A key SINE objective is to share ideas on how to run better workshops and develop soft skills in areas such as event management, teamwork, sustainability and networking. At SINE, our EMEA volunteers were able to take part in learning workshops such as Role Specific Training, Succession Planning and Handover, Networking Skills, Commercial Collaboration and Partnerships, Volunteer Engagement and Introduction to Public Speaking. These workshops are particularly pertinent as SINE coincides with the induction of new chapter executives,

This year’s EMEA conference focused on ‘innovation’ and the conference agenda was curated to include initiatives such as the “Cool Ideas Showcase”, “Workshop Challenge” and “Workshop Ideas, Stories and Experiences”. These initiatives encouraged chapters to share their experiences over the last year and learn from each other. There were also plenty of opportunities to ask questions and give feedback to the regional team during our Industry/Graduates Panel and Outgoing Panel. These events equipped volunteers with insights that allowed them to better plan for the year ahead and improve in areas that would most benefit our chapters.

2017 was clear a year of growth for EMEA as the regional team expanded from two to eight members. Furthermore, EMEA welcomed the launch of two new chapters at the University of St. Andrews and London South Bank University. EMEA SINE was also a fantastic time for our EMEA volunteers to celebrate their 2017 achievements and reward volunteers for their hard work. The following awards were presented to selected EMEA chapters during the annual EMEA awards ceremony:

March will be a busy month for EMEA with International Women’s Day coming up on the 8th of March as well as Big Bang Fair on 16th and 17th March. EMEA is also planning a new Science Challenge across the region, which will most likely run in 2019, as well as various workshops and activities throughout the year.